In the ancient courts of Asia and the Eastern Roman Empire, people of high status such as emperors or monarchs would have fabric canopies over their thrones as a sign of honour. This allowed the person of importance to be quickly identified in a crowd. This probably developed from very early times when people of importance, such as royalty, would have travelled under a cover to shelter from the elements. The painting below shows the Holy Roman Emperor, Otto III, who lived from 980 to 1002CE, enthroned under a canopy with a cloth of honour behind.

The detail from a painting of the family of Henry VIII, shows him on his throne with a cloth of state which forms both the canopy and the cover behind the throne.

On display in the Burrell Collection there is a very fine example of a canopy made for Queen Elizabeth I, when she visited Sir Roger Wodehouse and his wife Mary Corbet at Kimberly Hall, Norfolk, on the night of 22 August 1578. Called the Kimberley Throne, it would have had a raised platform to place the Queen above ‘ordinary’ level of her subjects.

Kings and Queens along with their court would often go on a ‘Royal Progress’ around their Kingdom to be seen by their subjects. On this occasion, Queen Elizabeth and her Court were on their way from Norwich to Cambridge. The heraldic arms of the Wodehouse and Corbet families is embroidered on the backcloth. The two ‘wildmen’ supporters of the shield of arms are a punning reference to the word ‘wode/wood’ in the name of the owner (‘wild man of the woods’), and these two men carrying clubs also recall, in the fashion of a parody, the classical hero Hercules, who is also usually depicted carrying a club in art. It is probable that this ‘throne’ was made up from hangings which already existed in the Hall, and perhaps originally formed part of an elaborate tester bed. The rich embroidery was professionally worked, and possibly carried out in Italy.

It was a great honour to host the court but the cost could bankrupt a family as there were dozens of people in the court to be entertained and looked after. Hosts would compete to put on better and more lavish hospitality than anyone else.

Although the terms are often used interchangeably, a cloth or portable canopy is properly described as a baldachin. The term baldachin (there are lots of different spellings) derives from the Italian “Baldacco”, referring to a rich embroidered brocade of silk and perhaps even gold, that was mainly sourced from Baghdad. If the canopy is a more permanent structure of wood or stone, such as might be found over a church altar, it is referred to as a ciborium. Ciborium can also refer to the architectural niche in which the statue of a saint is placed, as in the 15th century French or Flemish example from the Burrell Collection above; a limestone niche with a Saint holding a shield.

As an important symbol of status, canopies are everywhere in Christian art. Reliquaries and other church objects designed to contain objects of great religious significance often also have canopies. For example, the early 16th century German Monstrance (below), made with gilt and engraved copper with champlevé enamelling shown below.

Monstrances were used to display the consecrated Host for the Mass and to carry it in procession. In the Burrell example, the rock-crystal cylinder which would have contained the Host is missing.

Just to compare two examples of the Annunciation; the left wing of a triptych (below) by an artist with the catchy name “Master of the Prado, Adoration of the Magi”, and the Nottingham alabaster (at the bottom) that has been mentioned before. The Nottingham alabaster shows Mary reading her bible (the Old Testament) while kneeling under a canopy. The wing of the triptych is a little different; as Mary is in her bedroom, the artist has used the four-poster bed with the curtains folded into a tear shape exposing the unused bed (alluding to her purity) and creating the effect of a canopy to emphasise her status.

We’ll take a look at canopies in stained glass in the next blog.

The Church at Boppard from which the fabulous Boppard stained Glass windows came from, was built by the Carmelite Order in the first half of the 14th century and extended to the north between 1439 and 1444. It is therefore appropriate to take a short look at the history of the Carmelites, up to the building of the church at Boppard.

At the time of the crusades, Christian pilgrims flocked to the holy land, and after fulfilling their pilgrimage, some wanted to follow a life of prayerful solitude and service, and settled in different parts of the holy land, including the mountains around Jericho, the range of Mount Carmel by the Mediterranean sea, and Mount Tabor near Galilee, which is traditionally identified as the Mount of Transfiguration (so called because – according to the gospel of Matthew, chapter 17 – on this mount or hill Jesus was transfigured before his disciples: “… and his face did shine as the sun, and his raiment was white as the light…”).

Saladin was the first Sultan of Egypt and Syria and founder of the Ayyubid dynasty. In 1187, he had a great victory at the Battle of Hattin over the Crusader forces, where his Muslim armies inflicted a major defeat, effectively eliminating them as a fighting force and opening the way for the re-conquering of Jerusalem and several other Crusader-held cities. The only area now left to the Christian pilgrims to settle in was Acre and some areas along the med coast. The group who chose Mount Carmel were following the example of Elijah (also  Elias), a holy man and a lover of solitude, who is described in the Book of Kings. They established themselves in small cells and followed the Eremitic (or hermit) lifestyle near to a spring known as Elijah’s Fountain.

Elijah’s Fountain – [painting by Pietro Lorenzetti – 1328-9 for altarpiece of Carmelite church in Siena, Italy – now at Pinacoteca in Siena]

As independent hermits, this group had no founder, but after some years they decided to come together and become more formally organised. One of them, Brocard, sometime around 1209 and acting in a leadership role, contacted a priest of the Canons Regular and Latin Patriarch of Jerusalem, Albert of Vercilli (later to become St. Albert Avogadro) to write a ‘rule of life’ – a set of rules of consecrated life in the eremitic style. The result is the shortest rule of life in existence of the Roman Catholic spiritual tradition. The full pdf of these rules is available at http://www.carmelite.org/documents/Spirituality/rsacodtranslation.pdf.

The Carmelites took Mary, the Mother of Jesus, as their patroness, and they gradually became known as the Brothers of Our Lady of Mt. Carmel, and looked to the figures of Elijah and Mary for inspiration, and dedicated their first chapel to the Mother of God.

The Carmelites position on Mt Carmel was often under threat. They had been driven from Carmel but had managed to return and build a slightly larger church than the original, but eventually around 1238, the position of Christians in the area was so precarious that they had to leave.  They spread out to other countries (often their countries of origin, as many of the monks would have been crusaders or pilgrims), such as Cyprus, Sicily and France (Marseilles). Eventually, in 1242, they reached England (Hulne, near Alnwich in Northumberland, Bradmer in Norfolk, Aylesford, and Newenden in Kent), accompanying the Barons de Vescy and Grey returning from the crusade of Richard, Earl of Cornwall (1241). No longer perusing an eremitic lifestyle, the Carmelites turned from being hermits to friars, assumed the mendicant tradition, forbidden to own property in common, working and go wherever they were needed. In 1291, the remaining hermits on Mount Carmel were put to the sword and their convent burnt down.

The original Carmelite order was approved by Honorius III in 1226, and by Gregory IX in 1229. Partly due to their new distribution out of the desert and into cities, fresh approval was sought and given by Pope Innocent IV in 1245. At the second council of Lyons in 1274, the Carmelite order was definitively approved.

In 1287 the Carmelites adopted a pure white woollen mantel, which caused them to be called Whitefriars. The mantle is an important monastic vestment, which covers the whole person with the exception of the head, and has much symbolic meaning. It is sometimes referred to as the Angelic vestment due to its flowing lines which allude to the wings of an angel, and its folds represent the all-embracing power of God as well as the strictness, piety and meekness of the monastic life. The absence of sleeves indicated that the hands and arms of a monk are not for worldly activities.

The scapular has been an important part of the Carmelite habit since the late 13th century. It is like a long piece of cloth, about chest width, with a head sized hole in the middle so that it hangs equals down the front and back of the body. The Carmelite Constitution of 1369 stipulates automatic excommunication for Carmelites who say Mass without a scapular, while the Constitutions of 1324 and 1294 consider it a serious fault to sleep without the scapular. In the Siegfried von Gelnhausen panel, although not a friar himself, he is seen wearing a blue scapular. 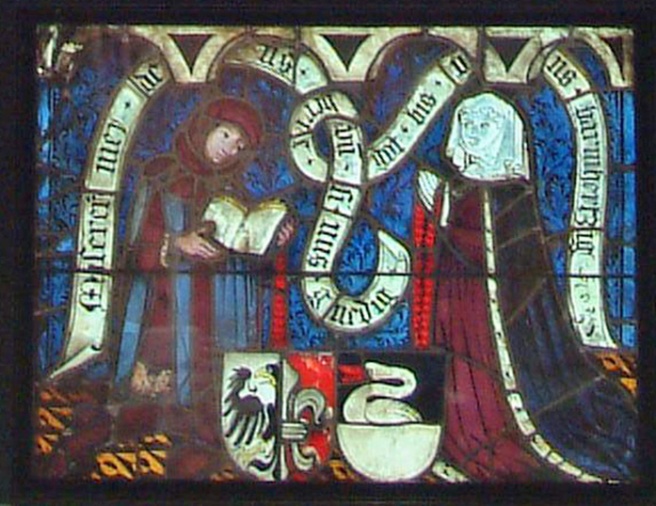